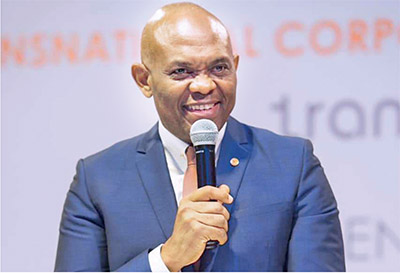 There is no gainsaying that banking mogul, Tony O. Elumelu has an unalloyed passion for entrepreneur- ship. For the affable Chairman of UBA Group, he’s undoubtedly passionate about the future of Africa and the youths. As one of Africa’s leading investors and philanthropists, as well as the most prominent proponent of entrepreneurship in Africa through his concept of Africapitalism, Elumelu, in 2010, created The Tony Elumelu Foundation, a private-sector-led philanthropy empowering African entrepreneurs. He later launched the $100 million entrepreneurship programme to empower the next generation of African entrepreneurs. In that same year, he founded Heirs Holdings, a family owned investment company, committed to improving lives and transforming Africa. Ever since, the billionaire banker has been motivating many young wannabe entrepreneurs with opportunities to activate and scale their businesses. So far, he has empowered over 7500 entrepreneurs across all 54 African countries with seed capital, business training and capacity building skills needed to grow their businesses. In July, at the 12th ex- traordinary session of the Africa union in Niamey, Ni- ger, Elumelu signed a deal with UNDP for another 10 years commitment to empower 100,000 entrepreneurs in the Sahel and Lake chad region, and just this week, another batch of 2100 lucky African entrepreneurs joined the TEF-UNDP entrepreneurs programme.

As a philanthropist extraordinaire, Elumelu has on speed dial many African leaders who love to identify with him because of his investment in African youths, as well as his effort at uniting the continent through banking.

When the Delta State-born seasoned banker took over as CEO of UBA Group in 2005 following the merger of his Standard Trust Bank with the old UBA, the financial institution was a onecountry operation. With his team, their strategic intent was to expand all over Africa bringing excellence in financial services. Today, UBA Group is in 20 countries and waxing stronger, while his philanthropic activities are touching thousands of young African men and women in all 54 countries across the continent.

For his good gesture, he has been receiving accolades and plaudits. In 2018, Elumelu was named among the 100 most influential philanthropists in the world. In a survey by Richtopia, a United Kingdom-based digital platform, which used Kred Scores (Kred Influence Measurement) —a platform that attempts to measure online social influence based upon an openly published algorithm— to compile the list, Africa’s richest man, Aliko Dangote was recognised as the sixth charitable man in the world while Elumelu, was 11th on the list.

Early December, he received the All Africa Business Leaders’ Awards (AABLA) in Johannesburg. Organised by CNBC, the AABLA Philanthropy Award cat- egory seeks to identify and recognise individuals for their exemplary and unique contributions towards the social and economic development of Africa.

According to the organisers, the recognition was given to Elumelu for his outstanding moral and financial investment in Africa, and his support of young African entrepreneurs.

Prior to that, he has been recognized by his home country when President Muhammadu Buhari presented him the National Productivity Order of Merit (NPOM)

Award in recognition of his continuous hard work and total commitment to the empowerment of youths in Nigeria and Africa. The Award was instituted by the Federal Government through the Ministry of Labour and Employment to honour deserving Nigerians in recognition of their hard work and excellence. Now, the billionaire banking mogul is the only private personality nominated for the 2019 Silverbird Man of the Year.

As the popular saying goes, behind every successful man there is a woman. Elumelu has an equally entre- preneurial woman in the person of Awele Vivian Elumelu. A medical doctor of repute and mother of seven, Awele, Elumelu’s better half has also been a role model for career women across Africa. She is the Chairperson of Avon Healthcare and GAVI Ambassador of Immunisation in Africa. Awele has been helping her hubby in their goal of empowering Africa entrepreneurs to create 1million jobs and contribute $10billion in revenue to the African economy by the end of their 10-year programme. No wonder, in June, the internet went abuzz when CNN International shared a video of Elumelu and his wife, and referred to both as “Africa’s Power Couple” in recognition of their work empowering African entrepreneurs.

As it is often said that all work no play makes Jack a dull boy, Elumelu shocks those who thought they knew everything about him. At the annual end of year/ Christmas party of his Heirs Holdings, the usually serious-looking billionaire with a commanding height and charming smile, let down his hair and slipped into his real elements as he took to the dance floor to mesmerise staff and customers. Like previous years, 2019 was not different as the Balmoral Convention Centre of the Federal Palace Hotel was literally set alight by various top acts including D’Banj, Wizkid, Zlatan among others. Elumelu was the perfect host leading his staff and guests to celebrate a wonderful 2019 and waltz in style to a prosperous 2020.

Culled from THE SUN